Many of you have previously seen the series of posts I did for “high income” doctors aimed primarily at well-paid specialists or dual-income families making $500K-$1M or more per year. This post addresses the opposite issue, “low-income” doctors. The average physician these days makes around $275K, and polls show that the vast majority of doctors are in the $180-$450K range. This post was triggered by an email from a long-time reader with this question/comment:

Q.  How Can Primary Care Doctors Save 20% of Their Income?

In a previous post, you discussed savings percentages and you argued for 20% for physicians, which I think is a great goal but really isn’t very realistic for primary care doctors. In the US the average primary care physician made around $225K last year. If you remove hospitalists (which really aren’t primary care at all) from that equation, the number is even lower. Primary care providers also work a lot more hours than many specialists and are often the least satisfied physicians, as well.

I think many specialists don’t really understand how much of a difference in pay there is between themselves and their primary care brethren. For instance: The WCI can put away 20% of his income to retirement/savings and still have a take home pay that is higher than the GROSS income of most family doctors. It’s really not comparing apples to oranges. You talk about living like a resident, but honestly, if most family doctors put away 20% their whole career, they wouldn’t live much better than a resident their whole career. I chose my career because it’s what I like to do. It’s my calling. I understand I don’t get paid like an ER doctor. However, I do get tired of the population thinking I get paid like one. I routinely have patients that make comments about our charges that have no clue that they make well more than I do.

I sympathize with your plight and agree that family, friends, your patient population, and society at large assumes that because you have an MD after your name that you have a gold coin swimming pool at home a la Scrooge McDuck. However, I think you’re probably overstating the issue for most “low-income” physicians.

My Decade as a “Low-Income” Doctor

Before launching into the rest of this post, let’s take a look at my actual earnings record and savings rate. As you may recall, I graduated from medical school in 2003 but never made more than $200,000 in a single year before 2012. That’s about a decade I spent as a “low-income” physician. I’m quite familiar with what it is like, thank you very much. Yet somehow, apparently by magic to many physicians and other Americans, we managed to save somewhere between 5% and 63% of our gross income for those years.

In residency, making around $40,000, we saved 5-10% (46% in the year I graduated, thanks to the huge boost in income that last 6 months). As a military attending (making about $120K per year), I saved 26-63% of my income per year. As a “pre-partner” in my current group (making less than $200,000 per year) I saved in the 25-35% range per year. I vehemently disagree that the ability to save a reasonable percentage of your income has anything to do with whether you are a “low-income” physician or a “high-income” physician and is really much more about your chosen lifestyle/spending level.

Now, as a partner in a well-run, democratic emergency medicine group and especially as an owner of WCI, I make more money. But I had only been a partner for a year and WCI wasn’t making much at all when we became millionaires 7 years out of residency. That had much more to do with the way our family lived for the previous decade and with the financial habits we had instilled in ourselves.

Do we save a lot more money now than we did as a resident, a military physician, or an employee? You betcha. Is it easier to build wealth on a higher income? Absolutely. But I reject the notion that it is very difficult (much less impossible) to build wealth on an average physician income, or even significantly less than average.

I bet the average American household, living on about $70K a year, thinks it is pretty hilarious to see doctors making 3 or 4 times their income who think they have it rough. They think you’re rich because, compared to them, you are! So no, I don’t think the fact that you only make $90K, or $120K, or $175K, or $200K or $275K is an excuse to not be saving 20% of your income for retirement. Rant over, let’s move on.

I don’t feel bad for doctors who have a relatively low income. I know you can have a pretty great life on $150K a year, because I’ve done it. The ones I feel bad for are those with a high student loan burden. $400K at 8% on a 10-year plan requires payments of about $60,000 per year in after-tax dollars. Take a single doctor making $150,000 who pays $30K in taxes, puts $30K into retirement, and pays $60K in student loan payments and I can understand why that doctor might be feeling pretty pinched.

Several chapters of the original WCI book deal with this issue. The best solution is prevention. If your dream in life is to be a part-time occupational medicine physician in rural America making $90K a year, you probably need to avoid going to a medical school with tuition of $82,000 per year and paying for it with 6-10% interest rate student loans. At a certain amount of debt, you simply cannot afford to be a primary care physician. You don’t get a pass on math.

I would submit that a reasonable upper limit for your total student loan burden would be something like two times your expected attending salary. The less the better, of course, but at two times your salary, you’re starting to approach a burden that you will never escape from without some type of loan forgiveness program (whether PSLF after 10 years, if it still exists, or IBR after 20). At 3-4X your income, you have a real problem requiring extreme solutions.

If you’re like many who find their way to this blog, you may be beyond the point where preventing the student loan issue, choosing a more lucrative specialty, or enrolling in a forgiveness program can be part of the solution. At this point, your only options are to refinance your loans when rates drop and carve out a portion of your spending (hopefully prospectively, but if necessary retrospectively) to pay them off. As Dave Ramsey likes to say, live like no one else now so you can live like no one else later. 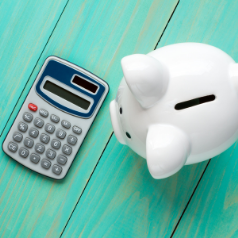 If you would instead spend your time looking at the 99.9% of those who have ever lived who make LESS than you, you would probably be a lot happier. Although spending money doesn’t increase proportionally as your income increases (due to higher tax bills and the need to save more to maintain lifestyle in retirement), a doc making $600K is always going to be able to buy more house, drive fancier cars, and take more exotic vacations than a doctor making $200K. However, having had the benefit of a more gradually increasing income than most doctors, I can assure you that a gross income of $300K doesn’t make you twice as happy as $150K, if it makes you happier at all.

Doctors making $150K don’t need very many retirement accounts, and may never need a taxable account at all. If they want to save 20% for retirement, they can just about get that out of a run-of-the-mill employer-provided 401(k) and a Roth IRA or two. No need to deal with tax-loss harvesting, donating appreciated shares, tax-efficient investments, muni bonds, I bonds, complicated estate planning or asset protection strategies, defined benefit plans, profit-sharing plans, SEP-IRAs, individual 401(k)s, whole life insurance, variable annuities, or stealth IRAs. Heck, they don’t even have to learn how to make Roth IRA contributions via the backdoor.

Disability insurance is really easy for a “low-income” physician. You can do it with a single policy. In fact, you may not ever need to do anything but exercise the FPO option on the one you bought in residency.

One downside of being a “low-income” physician is that Social Security tax will be assessed on a much higher percentage of your income, especially if you’re self-employed, than a doctor making $400K or more. However, this is countered by the upside of having Social Security provide a much higher percentage of your retirement income than for a highly paid doctor. Your Social Security payments will be essentially the same. Plus you get the same Medicare benefits as highly paid doctors, despite the fact that they might have paid 2 or 3 times as much for them.

Our highly progressive tax system is very favorable for the “low-income” doctor. I almost made it into the 10% tax bracket one year as an attending in the military. A family of four living on $150K can relatively easily get their federal tax burden down to 5-10% of their gross income. Surprised? Don’t be. Just run the numbers.

Sometimes, when coveting the salary of a CT surgeon, we forget that we only did a three-year residency, as compared to a five-year residency and a two-year fellowship. We may also forget about those Neurosurgery malpractice premiums, that General Surgery call schedule, or the time, effort, and talent required to match into Dermatology. When those poor suckers were cramming for two extra days trying to raise their board scores from 250 to 260, I was in the student lounge playing foosball or skiing. Many doctors in lower-paid specialties had a relatively easy match, enjoyed a short residency, and may work 95%+ of their career between 9 and 6 on non-holiday Monday through Fridays. That might not be worth $200K a year to you, but surely it is worth something. Aside from avoiding the pain of a longer residency, those of us who did shorter residencies also got into the game of serious retirement savings/attending salary sooner.

Now, before you post hate comments due to that paragraph, I am well aware that many specialties with long training periods have relatively low income (pediatric subspecialists have a particularly bad ratio of time in training to income), that some FP residencies are quite competitive and require lots of call, and many pediatricians do inpatient work. I’m just generalizing, so take it for what it is worth.

As always, the intraspecialty pay gaps are far larger than the interspecialty pay gaps and the most important thing in specialty choice, even from a financial perspective, is to pick something you love to do. Far better to be a preventive medicine doc for 30 years than burn out as an anesthesiologist after ten.

I think the most important thing for “low income” doctors to realize is that their financial situation is much more similar to an engineer, a small business owner, an attorney, pharmacist, or non-physician practitioner than it is to a plastic surgeon raking in $750K a year or an orthodontist making $1.2 million. Family, friends, and society at large won’t ever understand, but as long as you do, you can still have a very comfortable financial life.

What did I miss? Any other financial advice that is particularly important for doctors making less than $200K to know about? Comment below!

Is the Wealth Effect Making You Think You’re Rich?