[Editor’s Note: Today’s WCI Network post from The Physician Philosopher discusses a common fallacy held among most people, including the high earners who compose the audience for this blog. Most people think that more money will make them happier. While the data suggests that it actually does make people happier to have more money (particularly as income grows up to $75,000 per year), the effect of more money on your happiness is actually relatively small. I have been fortunate in my life to have a very wide range of both income and assets (from donating plasma for grocery money with a negative net worth to a 7 figure income and financial independence) and I can assure you that while more income/assets does increase happiness, the old adage “mo money, mo problems” is also certainly true. Enjoy the post!]

Recently, I published a post discussing the most recent Medscape burnout and depression survey results for physicians. An interesting point of discussion was that many physicians felt that if they made more money, they would likely be happier. Today, we will discuss the implications of this thought process and if there is evidence to support the claim. Will more money make me happier?

In the aforementioned survey results, physicians felt that the number one solution that would decrease burnout rates was earning an increase in pay. Of course, this doesn’t solve any of the major causes of burnout (non-physician busy work, electronic medical records, bureaucracy, and lack of support from administrators).

In the mind of the physicians filling out this survey, increased salary was chosen as it probably made the pain from the causes of burnout a little more palatable.

While student loans and other debt burdens seem to be a major contributor to burnout and depression in physicians, getting more money might not equate with lessening this burden.

In fact, physicians are notoriously bad spenders who rarely put money towards building wealth, and instead spend it on other things (cars, houses, etc.). Is this problem unique to physicians?

No. And we don’t have to look very far. It probably won’t take you any time at all to think of a famous athlete in the NFL or NBA who earned millions of dollars during their career and yet wound up broke. We even see this in Hollywood with The Greatest Showman being a great example of people who chased after more when what they had wasn’t “enough”.

Remember, with the low financial literacy that exists among physicians, more money won’t solve any problems for two reasons. First, most doctors won’t know how to use the money effectively. Second, more money doesn’t solve any of the actual causes of burnout.

How Much Money Do We Need?

In 2010, Princeton University performed a now-famous study where they described how much money people needed. What was the point beyond which increasing salary no longer improved someone’s happiness?

The answer is $75,000. Another study at Purdue produced similar findings where happiness and life satisfaction did not increase above $75,000-$95,000.

While the participants for this study likely were not highly debt-burdened families with hundreds of thousands of dollars in student loans, they were a broad cross-section of the country.

Ultimately, happiness in life and life satisfaction comes from being able to do what we want with our time. Money is simply the tool that helps us do that… but at some point, once your basic needs are taken care of, more money doesn’t help.

The answer to all of this, of course, is to learn the art of contentment.

#1 – Learn to Separate Spending from Happiness

#2 – Contentment Starts with Yourself

This relates to the next point, but there is something to be said about simply knowing yourself. Don’t let your self-identity get trapped by your profession. While working in medicine is a calling for many, it should not define who we are. Spend some time reflecting on what makes you…you.

#3 – Stop Comparing Yourself to Others

Many doctors have found that cutting back helped sustain their career.

#4 – Learn to Appreciate the Life You Have Been Given

In the end, contentment is not really possible if you aren’t appreciative of what you currently have. At the end of life, what will you remember the most? For me, this will certainly be my family and friends. It won’t be the extra shifts I worked or the amount of money I earned.

5. Answer a Question or Two About Your Life’s Purpose

If you spend some time reflecting on what you want to accomplish in life, you’ll likely realize pretty quickly that money might be a tool to get there… but it won’t take as much as you think.

It’ll also probably make you more intentional about how you spend your money and produce contentment along the way. 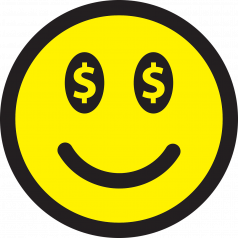 The earlier that we recognize that mo’ money simply causes mo’ problems, the better off we will be. Money is not the answer to most of life’s questions. In the end, all physicians likely earn an income that is high enough to produce life satisfaction and happiness.

Increasing pay will not fix your burnout or depression. Finding contentment and designing a life that intentionally pursues the things that matter just might.

Will money make me happier? Probably not. But making bad financial decisions with the money we earn can certainly make life much worse.

The take-home is simple: Learn contentment and increase your financial literacy to make smart decisions with what you currently have.

What do you think about making more money? Do you think it would make you happier? Are you content with what you have? How did you get there? Leave a comment below.

The post Will More Money Make Me Happier? appeared first on The White Coat Investor – Investing & Personal Finance for Doctors.

Should You Use Doctor Loans to Finance Investment Properties?

7 Financial Numbers You Should Know