The bedrock of traditional economics rests on something called optimization. According to economics, we are supposed to optimize our purchases based on their utility in our lives. Essentially, buyers are supposed to buy the most cost-effective product that accomplishes the intended purpose. What this means is that, when faced with choices, we buy the best financial decision for ourselves that our budget will allow. This idea is based on the premise that people are rational beings who choose the best option for themselves and their families. We shouldn’t count sunk costs, or our fear of loss when considering logical money decisions.

Of course, this begs the question, are we really rational? Do all of our decisions come down to good ol’ fashioned common sense and logic?

I’m here to tell you that you aren’t nearly as rational as you think you are. In today’s Behavioral Finance Series post (BFS #5), I’m going to give you one major factor that makes you largely irrational. Then, I’ll highlight four ways your irrational thinking impacts your financial decisions.

I don’t mean this in the competitive sense (though the record should note that Dad remains undefeated in my family’s night time back of the bedroom door basketball game!). What I mean is that people hate losing money.

In experiment after experiment, it has been shown that not only do people hate losing; we really hate it. In fact, we hate to lose about twice as much as we enjoy winning. Because of this people will actively try to avoid losses.

This is called loss aversion. In the setting of losses, we are more likely to have risk-seeking behavior, because we simply cannot stand the idea of losing money.

This has a profound impact on our day to day money decisions. Don’t believe me? Here are four classic examples.

Once we have put the time or money into something… it is gone. Traditional economics says that ongoing decisions should have nothing to do with what is already gone. After all, we cannot get it back.

However, that’s not how human beings operate.

Let’s say you like working on classic cars. You buy a used car for $5,000. Since you don’t do a backwards budget, you line item the budget for another $5,000 to restore the car. Once you purchase the car, it is yours. And that $5,000 is gone. You cannot get it back.

At this point, you could simply count your losses and sell the car. Or you could keep putting money into it.

That feeling in the pit of your stomach as you stand there having to make this decision is called the Sunk Cost Fallacy. You feel like putting more money into this car’s worth it because you have already committed a significant amount of time and money.

Of course, selling the car would be the rational choice. Take the loss, and avoid putting $25,000 into a car you only budgeted $10,000 to purchase and repair.

The Sunk Cost Fallacy explains why you are more likely to attend a sporting event in bad weather after you’ve already purchased a ticket (rather than selling it). It is also the reason you bought that expensive monthly gym membership, because you knew that the cost would make you go to the gym.

“Act now! This deal will only last through the holiday weekend!”

Have you ever seen ads like this? They work.

Why? Because people are afraid of missing out. Some call it FOMO. And it all results from the fact that we hate to feel like we lost a chance to take part in something. That feeling of loss is profound.

It is the same reason we are more inclined to buy a product that is offered at a discount. We are afraid of missing out on the sale (even if the product was originally marked up so that the “sale price” is actually the retail price).

The truth is that fear sells.

It is the same reason we are inclined to buy insurance on everything, including our cell phones. Of course, once you do the math to realize that the monthly insurance plan plus the deductible costs as much as a brand new phone, you are less likely to buy the insurance. However, that initial feeling of the potential loss of the phone because of a potential accident is a powerful incentive to buy the insurance. Even if it is irrational.

Many advertisers, conflicted financial advisors, and insurance salespeople rely on the fact that people hate losses. They often use this to sell people unnecessary products.

If you are aware of this irrational (but very real) loss aversion, it will help you stay away from decisions that may not be best for you and your family.

Have you ever noticed that something you own always feels more valuable than it actually is on the market? Why? Because it is yours. This is called the Endowment Effect. And it directly relates to our feelings of loss. 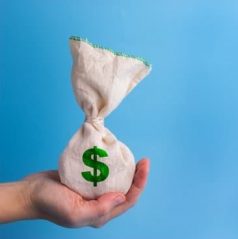 Let’s say that you buy a car. Then, after a few years, you discover the financial independence movement. As you start reading, you begin to understand that more money and stuff will not make you any happier. As a result, you think about selling the car.

You have a strong opinion in your head what your car is worth. But when you check the Kelly Blue Book value… you think it’s wrong. Surely, your car is worth more. You think this despite the fact that you wouldn’t pay the price you have in your head for your car today if you never owned it. Because of the endowment effect, you expect others to pony up the dough.

The reason that you place more value in items once you own them is that selling it feels like a loss. When you combine the endowment effect, the sunk cost fallacy, and loss aversion…it becomes very difficult to sell the car (or house), even if it is the best financial decision for you and your family.

4. Not Staying the Course

When the market is on a tear, many people barely notice. They make get a small feeling of joy when they look at their portfolio, but it doesn’t send their emotional state to Cloud 9. However, when the market is in correction, and trending down quickly, it can have a major negative impact on your emotional well-being.

People begin to worry, and thoughts quickly race through their heads. Is this going to delay my retirement? What if the market doesn’t come back up? I could have used this money to pay for my kid’s college, what am I doing?

The fact is, it is really hard to stay the course when it comes to investing. One reason this happens is because of a lack of historical knowledge about market corrections (a drop of 10% or more) which happens about every 1.5 years on average.

The second, and more powerful reason, is that we simply hate losing money. Watching our portfolio get cut in half (as many experienced in 2008/2009) is much more painful than the joy we have experienced as our portfolios continually climbed the following ten years.

This is all because of loss aversion. And it makes sticking to one of the founding principles of successful investing – staying the course – difficult to do. Knowing that we are prone to this error is half the battle!

Don’t give way to the sunk cost fallacy. Go sell the car that is helping you accomplish your goals (and doesn’t provide extra happiness). When you do, recognize the endowment effect… it’s worth what the market will pay for it. Not what you think it is worth.

Knowing our enemy is half the battle. And, in this case, the enemy is our own fear of loss. Instead of giving into loss aversion, admit to your irrational ways and make the smart money decision. Know that there is a behavioral aspect to economics, and use it to your advantage.

What do you think? Have you ever experiences loss aversion? Comment below! Like content by The Physician Philosopher? Sign up to get it directly in your email box as soon as it is published.

The post Your Fear of Loss Impacts Your Finances appeared first on The White Coat Investor – Investing & Personal Finance for Doctors.

Pilots Are High-Income Professionals, Too – Podcast #186